Hannah Ellis, a country/pop singer/songwriter based in Nashville, TN, has won the SongwriterUniverse “Best Song Of The Month” Contest for January, for her song “I Remember Everything” (co-written by Emily Weisband & Daisy Mallory). This well-crafted song was written & recorded last summer (2013) and it serves two purposes: (1) for Ellis’ next artist release and (2) for potential placement with other artists.

“I Remember Everything” is a very appealing, acoustic guitar-driven song which has a hooky melody in both the verses and choruses. The highlight is the song’s chorus, with its strong harmonies and full-band production. The lyrics are also descriptive and full of personality. This recording provides a fine showcase for Ellis’ expressive lead & harmony vocals. It was skillfully produced by Ellis’ friend Matt McVaney, who is a talented music student who attends Belmont University in Nashville.

Ellis grew up in the small town of Campbellsville, Kentucky, where she was inspired by listening to such artists as Shania Twain and Martina McBride. Musically, she focused on her singing early on, and then eventually began writing songs and playing guitar. Academically, she was a bright student who received a full scholarship to attend the University of Kentucky (in Lexington), where she subsequently majored in Integrated Strategic Communications (which includes marketing, public relations & advertising). 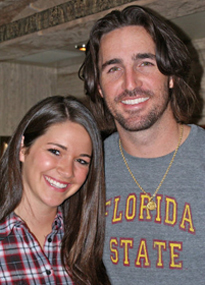 Hannah Ellis with country star Jake
Owen. Ellis was the opening act for
Owen at a concert in Hazard, KY.

It was during her college years that Ellis recorded a full-length album calledLet It Be Me (in 2009), and an EP named Here Right Now (in 2012), for which she wrote or co-wrote all the songs.

After graduating from college, Ellis decided to move to Nashville in early 2013 to pursue her music career. “I always knew I was going to Nashville,” she said. “My goal was to get better and meet people (in the music industry). I focused on becoming a better songwriter and guitarist.”

By the end of the year (2013), Ellis made good progress, writing & recording several new songs. She has recently signed with an attorney who will help her set up meetings for a potential music publishing deal. Later on, Ellis plans on also shopping for a label deal.

In addition to her writing & recording, Ellis performs shows regularly, both in Nashville and Kentucky. She has been the opening act for such country stars as Jake Owen, Lee Brice and Joe Diffie, and she has also performed at special events. Notably, she sang her song “Let It Be Me” at a memorial service at the U.S. Capital Lawn during Police Week in Washington DC, which was attended by President Barack Obama.

Maureen Fichten
To enter the next "Best Song Of The Month" Contest (the deadline is the last day of each month), please Click Here